Yesterday, Year 5 had the pleasure of watching a gripping yarns production about bullying.

The play itself was definitely ‘gripping’ and the children sat beautifully to listen to the story of Sam and the problems he was having at school with Snid. They also had some extremely valuable contributions and questions to ask at the end of the session.

There was lots of content to encourage the children to think really carefully about their role in a bullying situation. How being a bystander and allowing it to happen can have negative consequences, that fighting back just makes the situation worse and how important it is to tell a trusted adult if someone you know is being bullied.

On Friday, we went to Chichester Festival Theatre to watch the 2015 Children’s music festival.

The Orchestra played some amazing music, including the Overture of the Light Cavalry and the festival was truly entertaining. Brilliantly conducted by Jonathon Willcocks and excellently compered by magician  Neil Henry, who ‘magicked’ the coach away, the children (and adults) sat beautifully through the entire event.

After a brief rehearsal of the audience song ‘Running Order’, the Year 5’s were in splendid voice and action.

During a period of crowd participation, Charlotte was chosen to become a ‘conductor’ (not a bus conductor) and involved an intensive training period in front a full orchestra.

The staff at the theatre were extremely complimentary about the year 5’s behaviour and patience at having to wait such as long time for the coach after the concert finished.

Massive thanks to the parent volunteers who accompanied us for the day. I hope you enjoyed it as much as me! 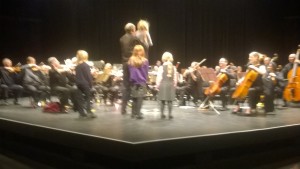