I had a really exciting day today! I got to sit in the front of a real ambulance, and was allowed to switch on the lights and work the sirens. It was the full ‘Blues and Twos’ as we say in the trade. Then I got to go up and down on the ambulance tailgate. It was great, a real dream come true.

Well, okay, the truth behind my fun experience stretches a bit wider. St Peter’s was lucky enough to have a visit from a team of 4 paramedics and first responders, who spoke during assembly about their roles in helping people who find themselves in emergency situations. After a great interactive assembly with the team who are more used to delivering people to QA than taking part in Q&A, children from different year groups got the opportunity to tour four vehicles that were stationed in the north playground, pictured below. The paramedics and response staff gave great demonstrations, and the pupils learnt a lot about the vehicles and their equipment. Thank you to all the staff who helped to make this possible. For those year groups that did not get to visit the medical vehicles, we have a fire engine on site later in the month, and they will get to tour this instead. After I’ve done the lights, sirens and sprayed the fire hose of course! 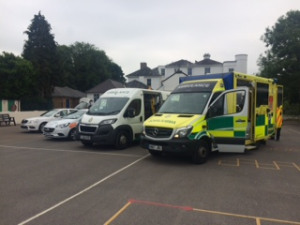 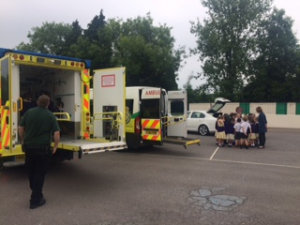 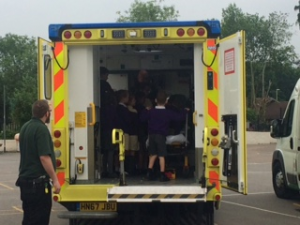