Well done to Year 5 for boldly going where no pupils have gone before, this school year from St Peter’s at least, and making the trip through the wind and the rain to the Intech Science Centre just outside Winchester.  Thanks you to the staff and volunteers who made this trip possible.  The Year 5 pupils have been astounding me in recent weeks with incredible home learning work on the planets and life in space.  The space topic has inspired the children really well, and who wouldn’t be hooked into doing maths based upon planet temperatures in Star Wars!  Some great models and information posters have been made about our solar system by Year 5, some of which are on display in the school foyer, but you will need to be quick to see them as Year 2 Titanic models are ready to set sail for centre stage during next week.

The talent in school is not just limited to classroom lessons and home learning though.  Pupils in Mrs D’s after school Story Time Club have put together an hilarious story of their own based upon a well-known series, writing ‘Supertato – Classroom Chaos’ in the autumn term.  This amazing publication has been granted the honour of sole residence on Mr Cunningham’s Wow Work! wall outside my office (see below).  In addition, the publication was well received (and reviewed) by the Supertato authors themselves who wrote a wonderful letter to the Story Time Club pupils at the start of the term.  To top of this triumph, ‘Supertato – Classroom Chaos’ was the most borrowed book in our school library in January, so well done to all the pupils involved. 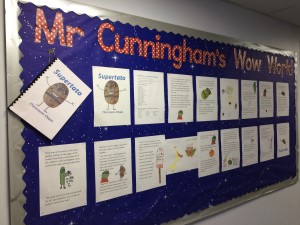 And finally, in the sporting spirit of fair play and neutrality, I hope that any of you who are interested in rugby enjoy all that the Six Nations has to offer, and may the best team (as long as they play in white and have a red rose emblem) win!