Putting the ‘fun’ into fundraising

This week has seen the pupils of St Peter’s go the extra mile to ‘Brighten up the Harvest’ as part of the year’s CAFOD harvest fundraising campaign.

The children dressed up brightly on Thursday to raise money for CAFOD and bring a wave of red, white and blue colour throughout the school, combining fundraising with our American theme day when they enjoyed some state-side treats served in the canteen.  The pupils were delighted with an indulgent lunch and a great selection of donuts for a very special treat, so my thanks go to Mrs Gray and her team for working so hard to serve such a lunch to the children.  The bright clothing raised over £360 for CAFOD, so thank you to the parents and carers who funded this across the school.

The fundraising continued on Friday with a Year 5 cake sale (motivated in part by the masses of goodies left over from the recent Runway’s End trip!) taking place under the sharp supervision of Mrs Edge, Mrs Moore and Miss Rayson, raising over £130.  To balance out the calories, not that children count them!, pupils in Year 6 ran afternoon outdoor activities and challenges that children in other year groups could take part in, and Mrs Turner’s and Miss Stapley’s classes raised over £100.  Well done to all of the children who took part.

To make sure that the children knew exactly what they were raising all the money for, we were lucky enough to have an assembly presented to the children by Patrick and Isobel Flynn representing CAFOD.  With the aid of garden tools, an overflowing vegetable trug and a box of worms, Patrick and Isobel helped the children to understand the importance of supporting our sisters and brothers in Bolivia as part of this autumn’s CAFOD harvest campaign.  http://cafod.org.uk/ 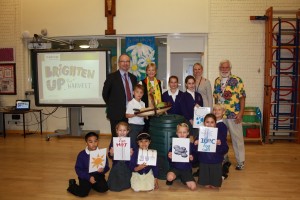 Not to be left behind, and thanks to the efforts of Mrs Luter, the staff at St Peter’s have also raised over £80 for Macmillan nurses through the coffee (and cake!) mornings, which in truth lasted over 5 days in the staff room!

So, in the space of just a week, St Peter’s has raised over £670 for good causes in the UK and abroad; a true demonstration of faith, compassion and commitment towards those in need.  Thank you to all who contributed in any way to these campaigns.